This update comes as an SD card image which needs to be written to the microSD card shipped with the SSP, using the freely available ETCHER software (https://www.balena.io/etcher/). See also instructions elsewhere in the forum. You have to unzip the .zip file to get the image, which is 32gb in size. Download the zipped image here - https://sw23072019.s3-us-west-1.amazonaws.com/ssp-sandisk-extremepro-32gb-230720191843.zip

The image contains an updated operating system, drivers and application. The update includes the following:

This basically allows the SSP to function as a multichannel USB audio/cv/trigger/gate interface, with 16 physical inputs and 8 physical outputs, DC coupled.

When the SSP is plugged in via its USB device port (far right) to a Windows or Mac computer it will enumerate as an audio device. No drivers are necessary. Testing has been done with Windows 10 (latest build) and Mac OSX Mojave. Previous versions of Windows 10 or Mac OSX might work but this is not guaranteed. Windows versions before Windows 10 will not work.

On Windows, the SSP has been tested with Microsoft’s WASAPI API, which is their low latency effort and which is supported by Reaper and other modern DAWs. We don’t support ASIO, since we support WASAPI. If you need ASIO support you can try to use ASIO4ALL or flexASIO, two free projects that let you use WASAPI devices via ASIO.

Changing sample rate on the SSP will disconnect and reconnect the SSP with the host computer, with a different sample rate and channel count. This means that if you change sample rate while connected to your DAW, you might have to go into the audio settings of the DAW to re-open the SSP audio device (called Percussa Audio), with the new channel count.

Keep in mind that if you are running a heavy patch on the SSP with the CPU usage approaching the maximum, that switching to higher sample rates will double the CPU usage, possibly resulting in audio interruptions, which might affect the ability to record and stream audio via USB. If this happens you might need to simplify the patch you are running before switching to a higher sample rate.

The input module has been extended to have 24 outputs and has been simplified.

The toggles to route channels internally in the input module have been removed, so all you need to do now to use the input module is insert it and connect it to other modules. These changes won’t break patches (see below).

The input module now has 24 scopes. These are always shown regardless of the number of active channels. The 16 input jacks of the SSP are summed with the first 16 channels received via USB. If there is no computer connected then the signals are just the signals from the input jacks. So the 16 input jacks are either summed with 24, 16 or 8 channels received via USB, depending on the current sample rate.

The left/right cursor keys step through the channels one at a time, and for each channel you can adjust gain/bias. There are also two new parameters called Target A and Target B. These let you send an incoming signal to a different virtual output of the input module, potentially summing signals together. They replace the groups of toggle buttons that were previously in the input module. We’ve put in default values for the Target A/B parameters such that you don’t need to use them for most normal use cases.

The scopes in the input module always show the actual input signals and don’t show signals after gain or bias or internal routing has been applied.

The output module has been extended to have 24 inputs.

The output module now has 24 scopes just like the input module which show the outgoing signals. The first 8 channels always go out the physical outputs of the SSP, but they are also sent over USB to the computer if one is connected. The channels above 8 are only sent out over USB.

The multichannel recorder has been updated so it can record the summed channels the input module gives you access to. It still records 16 inputs and/or 8 outputs on the SSP, and depending on the sample rate and whether a computer is connected, those input channels might be summed with 8 or more USB channels. This allows you to sample audio directly coming into the SSP via the USB cable from your DAW or soft synths while also still sampling physical input jack signals, simultaneously as a multichannel WAV file.

There is one simple preset included with this update which just has the first two channels of an input and output module connected together. Using this preset you can use the SSP to play back stereo music, for example, basically showing how to use the SSP as a normal audio interface (DC coupled) with your computer. The preset is 048.pbp, called new48. Obviously this preset can be extended so you can use the SSP as an 16-input/8-output USB class compliant audio interface, for surround for example. Other applications could be to send CVs to and from your DAW, for example to use the patch running in the SSP with Ableton’s CV tools, Max/MSP or other DAW or modular environments running on your computer.

Video tour of the update 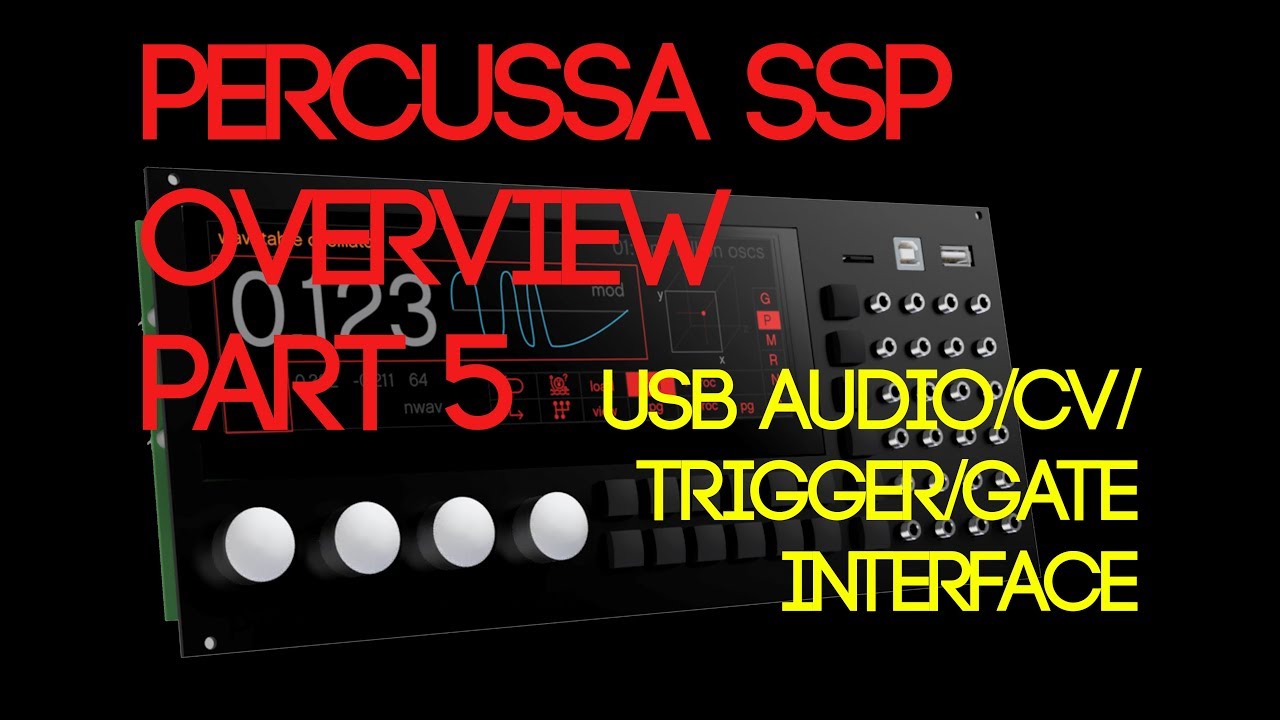 Besides all of the above, there have been many changes in the software and OS behind the scenes. This update has been extremely challenging engineering wise, and took about one year to get done. We hope you enjoy it, post videos and photos online and help spread the word about the SSP.

So I’ve downloaded the zip twice now, and I keep getting errors trying to unzip it. As the programs says there is an error as soon as you try to unzip it. This was on Elementary (Ubuntu) OS.

So I’ve downloaded the zip twice now, and I keep getting errors trying to unzip it. As the programs says there is an error as soon as you try to unzip it. This was on Elementary (Ubuntu) OS.

Mac OSX users might need to use The Unarchiver, a free unzip utility which can unzip large files.

Hmmm… Got it on Windows.

1 Like
Dead percussa SSP SD Card?
Audio over USB on Windows in Bitwig DAW problem
Making it work with Ableton yet?