Getting started with the SSP?

I need some help with the first steps into the Percussa SSP. Not with al off the possibilities but (for starters) getting basic sounds out of it.

I would like to start with a WTO or VCO. My questions:

I need some help with the first steps into the Percussa SSP. Not with al off the possibilities but (for starters) getting basic sounds out of it.

I’d recommend you watch the videos by Matt Hodson which contain a lot of good info about how to get started. The first video in the series of five is here -

After that I recommend you go through the patches that came with your SSP and see how the modules are interconnected. You can then use the search function of the forum (top right corner) to find info about each of the modules and what their inputs and outputs do, if it’s still not clear.

There are complex multi-voice patches in the patches that came with the SSP but also a lot of simple patches consisting of just an input / output module and a sampler/sequencer, for example.

how do I create 4 input modules with:

CV in, from a eurorack sequencer (not midi or usb controller, like all the video’s)
Trigger / gate in, from sequencer

input for external modulation (like external LFO or function generator)

output from SSP: stereo out.

Just insert an INPUT and OUTPUT module into the patch and a WTO module. Then go to the P-page of the WTO module and load a WAV file as wavetable (for example the file in the wt/ folder which is the wavetable that comes with the SSP).

The INPUT and OUTPUT modules represent the physical jacks on the SSP. The INPUT module also has scopes on the P-page to show you which signals are coming in on which jacks.

The inputs and outputs of the SSP are bipolar -5V/+5V so you might need to scale/offset signals coming fro your eurorack sequencer before you feed them into the SSP. Some sequencer’s voltage output range might be 0…10V so you have to offset that to -5V…+5V, otherwise you won’t get the full 10 octaves.

Hope this helps and welcome to the forum.

The input module is one of the more in depth modules, because it is the gateway to using the SSP’s expansive and powerful inputs. It is important that you first understand the basic way modules are connected to each other, and then how the input module allocates the input jacks making it possible to then connect them to other modules.

Give it a whirl, and then post here if you have any problems. I’d be happy to give you a hand.

Trust me though, once you’ve done this, you’ll have the SSP essentially figured out.

Thnx Guys, but nothing yet.

The video with maths als LFO start with a MIDI and then moves to CV.
When i plug in Maths als LFO nothing happens. I see a fixed high CV and no motion.

Is there a video out there explaining step by step how start from scratch using a SSP synth and controlling it with a CV/Gate sequencer?

When i plug in Maths als LFO nothing happens. I see a fixed high CV and no motion.

keep in mind that maths might output voltages beyond the +5V/-5V range of the SSP’s inputs. So this means that you have to scale/offset the signals from maths, before you feed them into the SSP. I have a maths myself and had to do this. Maths has offsetting/scaling features I think but you can also use another module like an intellijel triatt.

Always double check what the voltage outputs are of your modules when you connect them to the SSP’s inputs.

Other than that, did you watch all 5 videos by Matt Hodson? I believe he covers the input module.

I wanted to chime in on this, because I’m in the same position as OP. Ive started to watch the videos but each video is essentially 40 minutes long. Just wanted to ask if there is any written doc out there that has any info on how to get my feet wet with the SSP. Just do some simple basic synthesizer programming to get sound coming out.

check out my video : 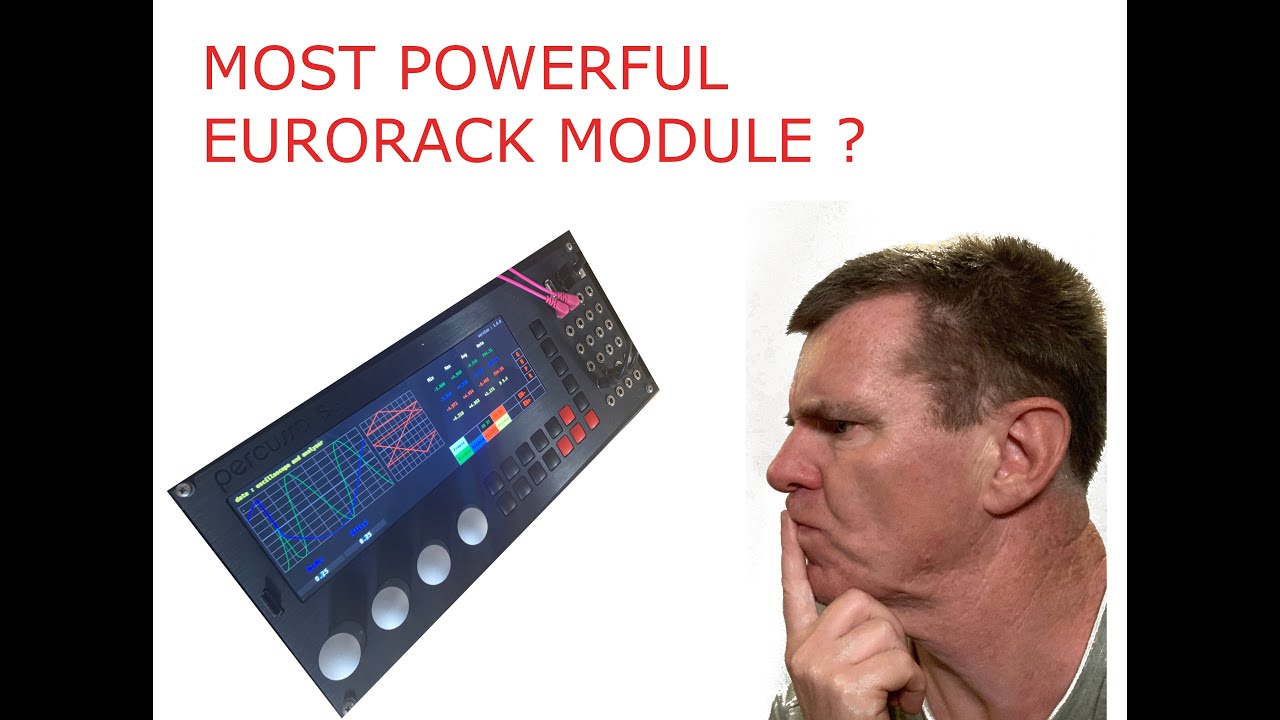 at 2min, I build first patch in about 60 seconds … the over next 5 mins or so extend it.

imho, a written doc would be a pretty poor way to describe how to use a visual patching system.
not only would it take alot of effort, but you wouldn’t be able to hear what was going on

the ‘problem’ with tutorials for the percussa, is what users want to know varies tremedously, and thier previous experience (and so what needs explaining) varies alot too - thats kind of why MATTHS videos are so long, since he needs to explain many things to ensure they are ‘self contained’

as others said…the approach id suggest is quite simple…

I think the only ‘tricky’ bit is polyphonic midi…
(shown in MATTHS video?, and is down in demo patches)
polyphonic midi is a bit ‘special’ ,the midi object only has one pitch/gate output…
so how can you do multiple voices (i.e. polyphony) ?
the answer is simple (but not obivous!) , you have to use multiple MIDI objects, each MIDI represents a single ‘voice’, and hidden/behind the scenes (the confusing bit) the SSP distributes notes across those objects…
lol - almost a perfect example of how the written word, makes it more complicated than it actually is in practice… simply create multiple MIDI object, connect to OSC, and you will SEE/HEAR how it works

anyway, like any skill/learning something a little complex - there is no shortcut, you just have to do it…
the more you do, the more obvious it will become.

I think the concepts of the SSP and workflow are pretty straightforward - once you have created one patch, you pretty much know all you need to know!
hence my first patch example
this is why I recommend you write a patch from scratch rather than try to understand a demo patch - its easier to write a patch than understand someone elses!

I think from there, its just about learning how individual modules work, and what they do… which you do by trying one module at a time, seeing how it works… and the incorporating into your own patches.

thanks technobear this is all much appreciated. I see youre super active on here and even on youtube! i actually last night after work just came home, plugged a usb into my computer and just noodled for like 3 hours. Forgot i wrote this post, but I can see now how really the only way to do it is nose dive straight in. Actually- that being said, the documentation is super helpful and easy to follow along once you have the context and familiarity of the ssp. I cant wait to go deeper into this module. Thanks again, super grateful for your help as always.

did you ever get this resolved? i just got my SSP yesterday and altho i do not have maths, i do have external LFO’s from my Ornament & Crime i would like to send to WTO on the SSP…you still have yours?